(or, let it E, let it E. Saw Eels tonight, ladies and gentlemen, and if you do not go out RIGHT NOW and buy an LP of Souljacker you don't deserve to have ears. God damn right it's a beautiful day. I'm not swearing, I'm just quoting lyrics here.)
People, the blog is almost done. This is the last trial-post. You can get uncensored versions of these posts via email if you send me a request. This blog will also "feature" a few side stories which are mainly for myself; they'll function to help me understand the disease.
So. Some more positive aspects of having ALS:
Other good news:
Less favorable news:
Other things to ponder. I'm way over my word-quota already but it's such an interesting time to live through. Not necessarily fun or easy but good to live in. One of my friends told me she needed 20 years to accept her diagnosis of MS (a disease that I remember hoping for, as odd as that may sound, when I was still awaiting the outcome of the tests (I even asked, at the first neurologist interview, if it could be ALS – I put it out of my mind the minute Paul said "I can't know two people with ALS, that'd be too big of a coincidence" – hence I never saw it coming, but I knew it was something bad all along, or I wouldn't have actually felt hope for MS )). Leave it to me to fast-track that process. The bizarre situation with my best friend's wedding (for the record, I have two best friends), which can only be metaphorized by the image of him flying high over the clouds in the sunshine, with me looking up from underneath, in the middle of a thunderstorm. I'm trying to be happy for him, but it's f..king difficult, which makes me feel like a selfish bastard and makes me feel like he is a selfish bastard for being so happy, and then I feel like more of a selfish bastard for feeling that about him, all at the same time. Interesting times. Good stuff for the zen training. And one of my teachers always said that your spirutial life begins with the awareness of death/mortality. Fast-tracking the enlightenment process along the way, thankyouverymuch. You may call me Lord Garmt Buddha when I've gained enough weight 🙂
It's not such a happy or funny entry, this one. I promise the next one will be happy and funny again. It's starting to seep through – the flash-vision, for instance, when I'm out to dinner, realising that a few years from now, the same friends that I joke with now will be feeding me while I'm talking back like Stephen Hawking. The idea that not all my friends, whom I all love so, so much, will be willing or able to put up with the situation as it worsens. Fuck, scary pictures. And the biggest thing I keep avoiding – Iris, how can we together, ever, ever begin to build our life around this? What can I ever do to .. there aren't even words. Insert funny joke here, I'm out for the moment. Off to hug Iris and be as good to her as any and all living humans should be. My bravest friend said it the night of the diagnosis: hey, it's fucked up for Garmt, but who I REALLY feel for is Iris.
Edit a few days later: picture of Eels, at the open-air theatre, where they played so hard the sky almost fell down. 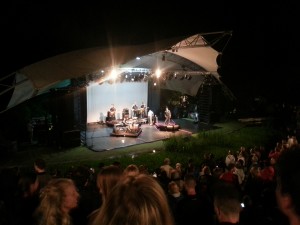